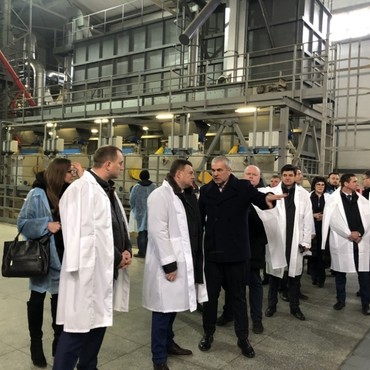 The ceremony was attended by the Head of the Tambov Region Administration, Alexander Nikitin.

In his welcoming speech, the Governor noted the great importance of the enterprise for the economic development of the region.

“The growth reserves of the economy of the Tambov Region are primarily in the processing of agricultural raw materials, and this project reflects this vector of the region development”, said Alexander Nikitin.

The company has implemented a new investment project for expanding the manufacture of sunflower seeds processing from 375 to 700 tons per day. Thanks to it, the volume of oil manufacture at the enterprise has doubled from 150 to 300 tons per day. The project implementation contributed to the creation of 68 new high-tech jobs with decent wages.

“This investment project is a priority for the region, and it has been provided with all kinds of state support in the form of tax incentives for corporate property tax, income tax, subsidizing the interest rate on an investment loan aimed at the purchase of equipment for the oil manufacture, as well as for the technological connection to power grids”, stressed the Head of the region Alexander Nikitin. “For such projects to continue to exist and be implemented, we should support them both at the federal and regional levels.”

The modern equipment used at the enterprise makes it possible to produce unrefined winterized sunflower oil. It undergoes partial purification with the passage of hydration and filtration stages. Subsequently, unrefined oil becomes transparentwith no sediment and has a pleasant taste and smell. As a result of this processing, the oil preserves almost all biologically active substances.

“We can be proud of this environmentally friendly Tambov product and present it at exhibitions and expositions of the highest levels”, the Governor emphasized.

Due to the waste-free production technology used at the enterprise, the manufacture of cake and husk is performed here too. The husk is used to produce fuel granules - pellets. The certified laboratory controls the quality of finished products, which are in demand not only in Russia, but also in the countries of the near and far abroad.

Ecooil Agricultural Holding is the largest manufacturer of sunflower oil in the Tambov Region. Today, there is an active construction of storage facilities in the enterprise territory for the one-time storage of 150 thousand tons of sunflower grain. The warehouses will operate in a fully automatic mode and are being built taking into account the further increase in the manufacturing capacity of the agricultural holding.

One should note that Ecooil JSC has a high export potential. Negotiations with representatives of China and India are underway in terms of cooperation for the sale of sunflower oil. Over the past three years, the company has exported sunflower oil and pellets made of sunflower husk to the near and far abroad countries, having gained experience of interaction in the international market.

Ministry of Agriculture of the Russian Federation